I am a 40-year-old guy, who lives near to Stamford, in the East Midlands, England. I was born in Chorley, Lancashire, England, at some point during September 1979. Most people don’t believe me that I was born in England due to my strong Scottish accent. My star sign is Libra. I am 5’9” tall, 30″ waist, with blonde hair, which is sometimes short, sometimes long. I have light brown eyes. Which most people think are very sexy. I just don’t see it, myself.

I am currently work part-time being a bar supervisor. Been working at the same unnamed place, since April 2003. Most times I do really like working their. Most of the people are great to work with and some of them are not half bad looking which, of course does also help.

I love my family to bits. At times they really do my head in. But I have no idea what I would do without them. Now that I stay miles away from them. I am in England and they are in Scotland. I have come to realise, just how much they mean to me. At least I know that they are only a phone call or email away.I don’t think that my Mum, or Dad, will have ever read this page. But one day if you do. I would just like to say that I really love you both and have no idea what I would do without you. Thanks for being there for me and for always standing by me. I have two brothers one called Craig, who is 34. He works for West Dunbartonshire Council in the planning department. The other is called Douglas, who is 40. He works full time doing IT doing Systems Support. I get on with my younger brother Craig the best. I remember when I first told him that I was gay. He was so cool about it and still is. I can tell him more or less anything. He is always there to listen to me. He has even been to a gay café in Glasgow with me. I am sure that I will get him to go to a gay club at some point, which will be so happy. Just in case you wanted to know. He is 100% straight.

On the other hand my big brother Douglas and me don’t really get on that well. We never really have done, we still speak to each other. But I just don’t connect with him, like I do with my wee brother.

I am dyslexic, which makes it difficult, for me to read and write. This affects about one in 25 people. So that is, why you might notice, a lot of spelling and grammar errors, (I sound like a computer again) on my homepage.

The one and only good thing about being dyslexic is that I, did not do French at Primary or High School. Because I had to do learning support instead. Which I hated doing at the time. But looking back at it now, it did me a lot of good. 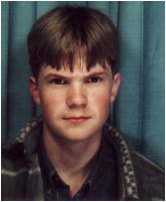 When I was young, the only image of homosexuality that expressed by others was the negative one. It seemed to me, at the time, that everybody who I had ever met thought being gay was such a terrible thing. I had heard all the jokes and remarks about gay people. I first started to think that I was gay at the age of 13. At this age it did cause me a great amount of difficulties that included feeling suicidal and deeply depressed for a number of years after.I did not come out to myself till I started college in 1996. Even then it still took me 2 years to tell all my friends at college that I was gay, because I had no idea how they would take it. But lucky they all toke it very well. I think that most of them had worked it out, before I told told most of them.People at first didn’t want to talk to me about my sexuality in case they upset me, or in case they thought they might offend me in some way. They wanted to ask questions from who I fancied to when I found out I was gay. The truth is I don’t mind people asking me about my sexuality, out of curiosity or through education.

I told my parents, that I’m gay in 2001. Lucky they both took it well. Since then they have meet my boyfriend and better still they like him and they are happy that, I am happy. 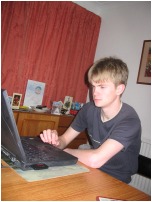 Lots of people say that I spend way to much time using computers, which maybe I do. But just think if I did like computers so much, you would not be reading this website. Also since I am dyslexic I could not really live without using them, they make my life so much easier. If you could see what my spelling, is like when I am not using a computer, you would see why I use them so much. My spelling is a bit crap to say the least. What people did before spell checkers I have no idea at all.